Atrocity Alert No. 287: Democratic Republic of the Congo, Ethiopia and Red Hand Day

On 1 February fighters from the Cooperative for the Development of Congo (CODECO), a predominantly ethnic Lendu militia, attacked the Plaine Savo displacement camp in the Democratic Republic of the Congo’s (DRC) Djugu territory in eastern Ituri Province. The fighters used guns and machetes, killing at least 60 displaced people, including more than a dozen children, who were all members of the ethnic Hema community. Following the deadly attack, an estimated 35,000 people fled to a nearby UN peacekeeping mission (MONUSCO) base for protection. In response peacekeepers have increased their presence and are conducting patrols in the area surrounding the camp.

Condemning the Plaine Savo attack, Liz Throssell, Spokesperson for the UN High Commissioner for Human Rights, stated that, “we are extremely concerned by recurring incidents of deadly ethnically-motivated attacks on internally displaced people’s [IDP] camps… Following deadly attacks last week and further attempts over the weekend, there is significant risk that other IDP sites could be attacked as well. We call on the DRC authorities to urgently strengthen the protection of civilians, including by ensuring the safety and security of IDPs.”

The “state of siege” President Félix Tshisekedi declared on 30 April 2021 has done little to protect civilians in the region from armed groups, nor has it improved the overall security situation. The deadly raid at Plaine Savo occurred amid a cycle of escalating armed violence, including deliberate attacks against displacement sites and growing inter-communal tensions in Djugu territory. Between 19 and 28 November CODECO fighters attacked four IDP sites in Ituri, killing at least 58 people from the Hema community and forcing tens of thousands to flee. Pervasive insecurity and atrocities have caused waves of displacement in Ituri, with 1.97 million people currently displaced, including more than 742,000 IDPs in Djugu territory.

The series of attacks in recent months may further aggravate inter-communal violence in Ituri, where ethnic tensions between the Hema and Lendu communities have existed for years. The UN has previously accused CODECO of potential crimes against humanity for its role in inter-communal fighting between Lendu and Hema communities that resulted in 700 people being killed between December 2017 and September 2019. The majority of victims were from the Hema community.

The DRC government must urgently address the situation in Djugu territory by working closely with leaders of the Hema and Lendu communities to de-escalate tensions and prevent an increase in inter-communal violence and additional attacks on other IDP sites. The government and MONUSCO must protect those who have already been displaced by conflict and ongoing atrocities in Ituri. Recent attacks on IDP sites in Ituri should be investigated and the perpetrators punished. International donors should support efforts by the UN Refugee Agency and other humanitarian agencies to provide shelter, resources and psychosocial support to those fleeing atrocities.

300,000 MORE PEOPLE DISPLACED AMID REPORTS OF STARVATION IN NORTHERN ETHIOPIA

On 4 February the UN warned that ongoing clashes in Ethiopia’s northern Afar region are continuing to exacerbate humanitarian needs and prevent aid delivery into the neighboring Tigray region. Sporadic, heavy clashes have also continued to erupt along the Amhara and Tigray regional borders, leaving the situation “tense and volatile.” The conflict between Tigrayan forces and the Ethiopian National Defense Force and their allied Amhara and Afar militias is also leading to mass displacement. According to Afar regional authorities, more than 300,000 people have been displaced in the region as a result of recent fighting, driving civilians to flee into remote areas inaccessible to aid workers.

Meanwhile, access to approximately 6 million people in Tigray remains impeded by ongoing hostilities in the neighboring Afar region, as well as by restrictions imposed by the federal government in what the UN calls a “de facto aid blockade.” The World Food Programme reported that more than 40 percent of Tigrayans are suffering from an “extreme lack of food.” Furthermore, Stéphane Dujarric, Spokesperson for the UN Secretary-General, warned on 27 January that humanitarian “operations could cease completely by the end of February” as aid agencies have been forced to scale back operations in Tigray due to significant shortages of essential supplies, fuel and cash.

According to a report published on 27 January in Ethiopia Insight, at least 5,421 “blockade-related” deaths were recorded in Tigray between July and October. This was the first such assessment since the conflict began to measure the effects of the destroyed healthcare system on Tigray’s population. The report, authored by Dr. Hagos Godefay, Head of the Tigray Regional Health Bureau, attributed the primary causes of deaths to malnutrition, infectious disease and non-communicable diseases. At least 1,479 people, including 369 children under five, died of malnutrition while more than 3,200 others died from disease. Dr. Godefay attributed the deaths directly to the lack of aid and restricted access to Tigray. Earlier on in the fighting, parties to the conflict systematically targeted Tigray’s healthcare system, hindering Tigrayan’s access to lifesaving care. The targeting of aid and medical facilities, as well as impeding the delivery of humanitarian aid, may amount to war crimes and crimes against humanity.

Despite the recent announcement by the UN Secretary-General that “demonstrable effort” has been made towards peace, a formal cessation of hostilities still remains elusive. Sarah Hunter, Communications and Digital Media Officer at the Global Centre for the Responsibility to Protect, said that, “while peace has repeatedly been teased, it is not the reality on the ground. All parties to the conflict must urgently agree to a true humanitarian ceasefire to allow unfettered access to aid and pave the way for genuine dialogue. All sides should immediately commit to peace to keep more innocent civilians from dying, slow, preventable deaths.”

UPCOMING INTERNATIONAL DAY AGAINST THE USE OF CHILD SOLDIERS

This Saturday, 12 February, marks the International Day against the Use of Child Soldiers, also known as Red Hand Day. Since the adoption of the Optional Protocol to the Convention on the Rights of the Child on the involvement of children in armed conflict (OPAC) on 12 February 2002, Red Hand Day has been used to raise awareness about the recruitment and use of children in hostilities. OPAC bans the participation of children under the age of 18 in hostilities.

The recruitment and use of girls and boys in armed conflict is one of the most egregious violations of children’s rights, identified and condemned by the UN Security Council as one of the six “grave violations” against children during armed conflict. According to the Rome Statute of the International Criminal Court, enlisting, conscripting and using children under the age of 15 in an armed conflict is a war crime. Despite some progress in recent years, tens of thousands of vulnerable children are still used in armed conflicts around the world where they are often exposed to other grave violations, including killing, maiming, sexual violence and abduction.

The UN Secretary-General’s 2021 report on children and armed conflict verified that more than 8,500 children were recruited and used in hostilities during 2020, including in Afghanistan, Central African Republic, Democratic Republic of the Congo, Myanmar, Somalia, and Yemen, among others. The number of documented incidents of recruitment grew in 2020 for the second successive year. In Syria the UN verified the recruitment and use of more than 800 children, 99 percent of whom were used in combat roles.

This year’s Red Hand Day falls within the 25th anniversary of the Children and Armed Conflict (CAAC) mandate. The UN General Assembly established the CAAC mandate in December 1996 to strengthen the protection of children affected by armed conflict, promote the collection of information about the plight of children and foster international cooperation to improve their protection. Since then, 172 States Parties have ratified OPAC and more than 170,000 children have been released from armed groups and armed forces. However, comprehensive reintegration of former child soldiers remains a significant challenge.

All UN member states should adopt and implement OPAC. States should also endorse the Paris Principles, aimed at combatting the recruitment and use of child soldiers in conflicts, as well as the Vancouver Principles on Peacekeeping and the Prevention of the Recruitment and Use of Child Soldiers. The UN Secretary-General should ensure that the listing and delisting of perpetrators in the annexes of his annual report on children and armed conflict remain credible and evidence-based. 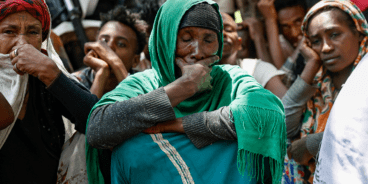